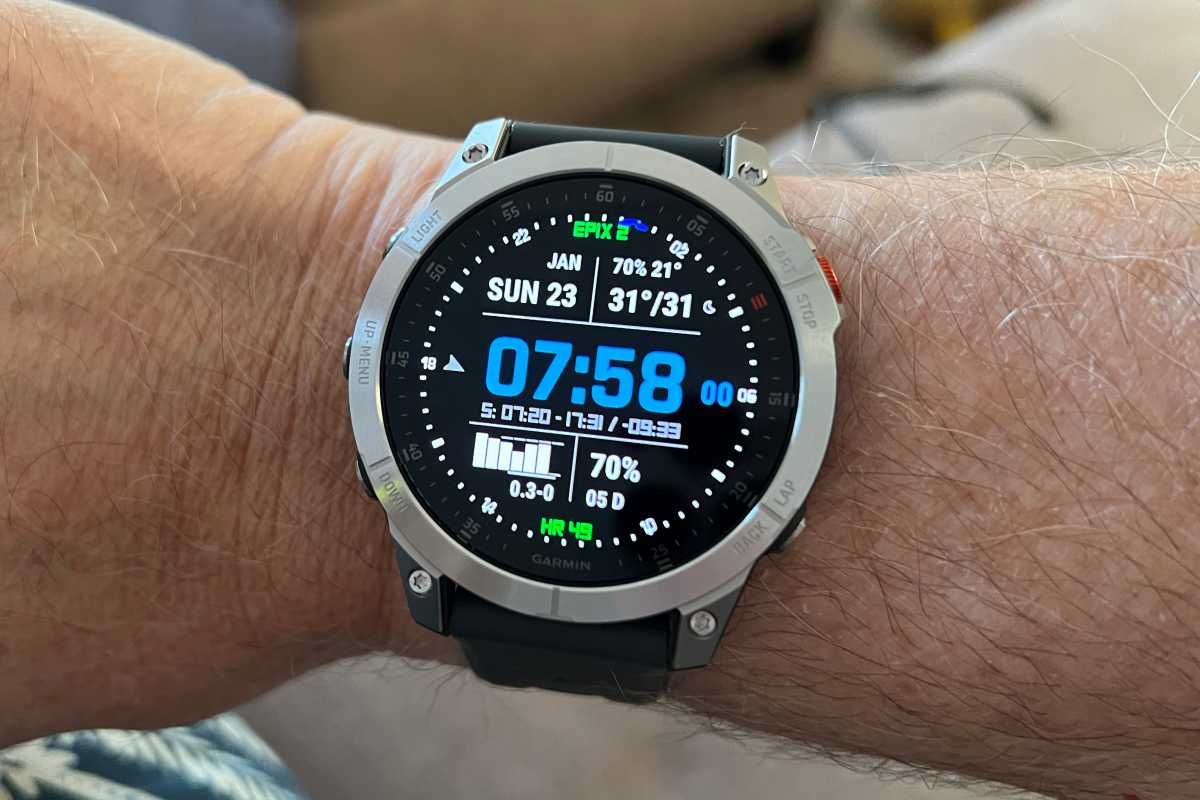 The Apple Watch Ultra was designed and built with someone like me in mind. I have an iPhone 14 Pro Max, a 16-inch M1 MacBook Pro with Studio Display, three Apple TV 4K boxes, and a 12.9-inch iPad Pro with a Magic Keyboard. In other words, I’m deeply embedded in the Apple ecosystem, but on my wrist I alternate between two Garmin smartwatches: an older Tactix Delta and an Epix Gen. 2.

I tried the Apple Watch when it launched in 2015, but haven’t worn one in many years, mainly because I wanted something bigger that lasts longer and is more focused on fitness. Every time a new Apple Watch model arrives, I debate the pros and cons, but Garmin always wins; Simply put, I like big, chunky watches, and to me, even the 45mm Apple Watch Series 7 always seemed too dainty and small. more of a fashion statement than a fitness tool.

Compared to previous Apple watches, Garmin watches are clearly designed for dedicated athletes. In addition to design and build quality, they live up to battery life claims (days stretching to weeks, depending on GPS usage and battery-saving settings) and provide a torrent of data on everything from the fitness to sleep, stress and calories. And they usually last for many years.

The 51mm Tactix Delta has gone to the gym with me every day, gone on hikes and hikes, and it’s so tough I could probably use it like a hammer. The battery lasts days and days and all that data really allows me to keep track of my fitness. When I’m not at the gym, I wear the Epix Gen. 2, which has a beautiful AMOLED screen and feels more like a casual smartwatch, but it’s still big, sturdy, and lasts for weeks in battery-saving mode.

Like the rest of my Apple gear, none of my Garmin watches were cheap. The Epix starts at $900 and the Delta was even more expensive when new, both more than the $799 Apple Watch Ultra. So when Apple introduced the bigger, tougher Apple Watch Ultra at a price lower than any of my Garmin watches, I was instantly intrigued. As soon as the Ultra was announced, I ordered one.

Garmin has long used memory-in-pixel (MIP) transflective displays that are great outdoors but less so indoors, though the backlight works well enough to easily see what’s on the screen. In my opinion, MIP doesn’t compare to the OLED LTPO display on the Apple Watch, which is where the new Epix comes into play. The Epix Gen. 2 brings the best of both worlds to the Garmin lineup: fitness, tech, and fashion, and even with the screen always on, you can easily go a week between charges.

Another less than ideal part of Garmin’s life is how well its watches work with the iPhone. In general, the Garmin Connect and Garmin ConnectIQ apps work well between the two ecosystems, but you can’t do as many things with a Garmin watch as you can with an Apple Watch. You can’t make phone calls or reply to messages directly from the watch, you don’t have access to Apple’s deep library of apps, and it doesn’t integrate as seamlessly with Apple Health. (You get a lot more watch face options since third-party developers can create them for Garmin watches. This is a big plus for me.)

With the arrival of the Ultra, more than a few instant debates erupted online about whether it goes far enough to be considered in the same breath as Garmin devices. Garmin even joined the debate, firing a tweet Shortly after the Ultra was introduced it boasted: “We measured battery life in months. emergency hours.”

If it’s features like long battery life and built-in maps you’re looking for, the Apple Watch Ultra isn’t for you. The Ultra doesn’t quite match the array of outdoor features that Tactix and Epix offer, though given how quickly Apple iterates its products, my hunch is that it will close the gap quickly.

I quickly discovered that Apple has come a length in terms of the fitness and health data it now offers with watchOS. It offers data that is almost as comprehensive as what I get from Garmin, so much so that it will take me a while to figure out the best way to use it. Setting up my new Apple Watch was a bit more complicated than it used to be, largely because it does so much more now. But kudos to Apple for quickly realizing that fitness and health was the direction to go, and then go there.

To be clear, I won’t be using my Apple Watch Ultra for races across the desert or diving 20,000 leagues under the sea. Compared to those athletes, I’m a phony. We’re talking daily visits to the gym, daily dog ​​walks, weekend hikes, and the occasional bike ride. As a result, the promised 36 hours of battery life is fine, especially since I can now easily track sleep. In real world use, in fact, I got much better than 36 hours. Even with several workouts over the past few days, I’ve gotten over 48 hours, and that’s without Low Power Mode and before Ultra’s battery optimization feature arrives.

I know the Ultra and its raw titanium design have been criticized for being a bit homey, but I disagree. It’s different, yes, but in a good way. It’s big and rectangular, and it doesn’t hide easily under long sleeves, but its rugged industrial aesthetic is clearly aimed at Garmin users and should appeal to Apple fans. It’s still on the Apple Watch, but it feels like a rugged wearable rather than a dainty smartwatch.

But where Garmin can’t compete is in the Apple ecosystem. I’ve only had my Ultra for a few days, but I can say that it’s definitely nice to have an Apple Watch on my wrist. As usual, it’s the little things Apple does that matter, like when my MacBook Pro locks when I leave and unlocks when I return. Or the simple ease of replying to a message without having to take my Pro Max out of my pocket to reply.

For the foreseeable future, I’ll be using the Ultra. But I also keep my Garmin. They’re still incredibly well-built and rugged devices that, mainly for the aesthetics of changing things up from time to time, might as well slap me on the wrist for a day (or days).

If Apple ever comes out with a 52mm Apple Watch Ultra Max with seven days of battery life, I’ll be first in line. But for now, it’s going to be hard to get the Ultra off my wrist. It’s big enough, prominent enough, and durable enough to tick all the boxes my Garmin did. And I don’t think I’m the only one.

Elections and crime in Seattle

WASHINGTON- Prosecutors obtained a search warrant for former President Trump's Florida estate after receiving evidence from multiple sources that there was "likely" an effort...
Read more

Behind the new anxiety screening recommendation

NPR's Michel Martin talks with Lori Pbert, a member of the US Preventive Services Task Force, about the draft recommendation that clinicians should screen...
Read more