Summary of episode 1 of season 2 of ‘The Kardashians’ 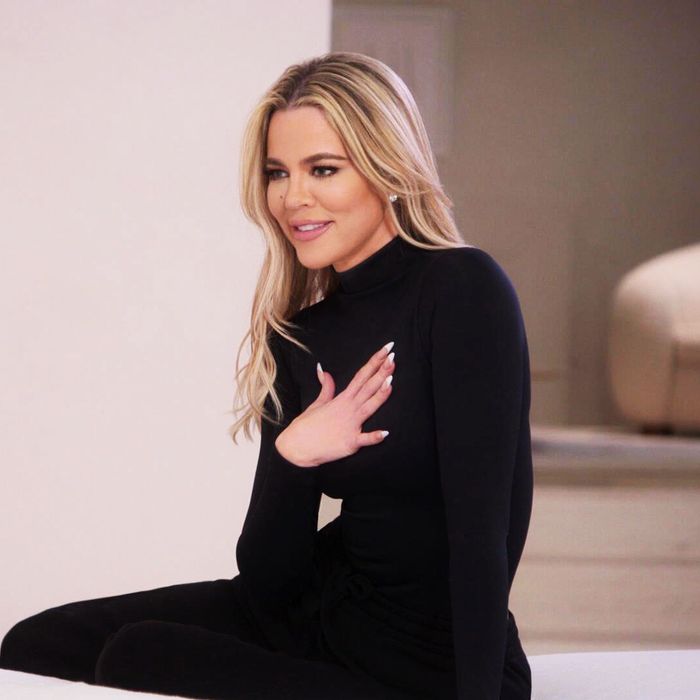 I have something to tell you…

At what point does reality TV become inhuman? The premiere of the second season of The Kardashians it really tests those limits, continuing the eternal series of unfortunate events that Khloé has faced year after year. We pick up right where the first season left off, following the bombshell that Tristan is having a baby with another woman. But if you keep up with the family off-air (I dare you to try not to), you already know that Khloé and Tristan were revealed to be expecting a second child at the time.

After an ominous cold opening about finally tackling the elephant in the room and preparing for the storm of trolls to come (plus a new red intro), the episode gets to work figuring out what this timeline looked like.

We go back to the scene from the first season where Kim finds out about the scandal and calls Khloé from her gym, but this time some images have been added. On that call, Kim told Khloé that it’s a sign that she shouldn’t have another baby with Tristan, prompting Khloé to reveal (off speaker) that, just days before, they successfully implanted an embryo into her substitute mother. “I’m filming right now!” Kim chimes in just as Khloé begins to say that she has a problem, and though we don’t hear the next conversation, we see Kim’s horrified reaction.

It’s a strange phenomenon to see it unfold, to have this good news that makes a terrible situation that much worse. As Khloé says, circumstances cast a shadow over what should be a happy event. And while the immediate family knows about it, it’s still a public secret at this point in an effort to protect Khloé from the storm of hate and ridicule that will (and did) come her way. That’s probably why he’s so transparent about the timeline: The embryo had been implanted days before Thanksgiving, and Khloé found out about Tristan’s situation the first week of December. He didn’t know what he would have done if he had talked about his other baby on the way: “I’m a lunatic but no, like a fucking deranged.”

Khloé and Kylie, whose birth cycles continue to be in sync, are discussing this when Khloé mentions that her nursery remains empty because no one in her house knows the secret. Kylie offers to sort and stock baby furniture in the meantime to keep it hidden from who, I assume, are Khloe’s staff, and she’s giving off a lot of “illegal hamster in a college dorm” vibe.

Meanwhile, Kris, Kim, Kylie and Kendall get together to talk about how they can support Khloé during this time. Kourtney apparently has the day off and asked Kendall to cover her shift. But Kendall brings up a big point: By knowing she had another baby on the way and encouraging Khloé to implant the embryo when they did, Tristan was essentially trying to catch her before the scandal broke.

Next in Khloe’s wellness check parade is Malika, and the conversation they have supports the point Kendall was making: Khloe says Tristan was actively urging her to implant the embryo by a certain date, fully aware of when it would arrive. his other son. We’ve seen a lot of scumbags in the history of reality TV, but Tristan Thompson still takes the cake.

We get a little glimpse of some much-needed respite when Kris and Khloé visit the condo in Beverly Hills that Kris forgot was hers. “This is our gift-wrapping season,” Kris says of an entire condo. Unlike the fridge full of produce in her house, the fridge in Kris’s gift-wrapping apartment is filled with dozens of emergency champagne bottles and Ziploc bags full of frozen beans, which the two wisely decide to throw away. Now this is where my ears perk up and my eyes narrow: I want to see Kris Jenner throw out a garbage bag.

Now, if you are like me and dispose of your own garbage, you are familiar with the drawstring garbage bag. That’s exactly the product Kris is working with, but instead of pulling out and tying the handy drawstrings, Kris just ignores them and ties the entire top of the bag. This implies that the last time Kris dumped his own trash was before the popularization of the drawstring trash bag. But it doesn’t end there: Instead of throwing the bag away, Kris opens the front door and whispers to an unseen figure to do it for her. And we wonder why Kendall couldn’t cut a cucumber last season!

Anyway, back to serious business. Kris is mourning Khloé for missing out on the joy of having a baby once again due to these circumstances; Lest we forget, Tristan cheated on Khloé days before True’s birth, which messed that up, too. Khloé is always sitting with her arms crossed, stoically listening as someone else weeps over her pain, and this conversation is no exception. But despite Khloé’s wishes, Kris convinces her to let them throw a little baby shower to bring at least a hint of celebration to what should be a celebration occasion.

Speaking of celebrations, her cousin and gift-wrapping station neighbor Cici walk in, looking like an absolute supermodel. She’s glam in a new hair color and couture outfit, really pulling it off for the Hulu cameras. Khloé breaks the news to her, and her genuine euphoria is the first time this baby announcement has actually felt like a baby announcement.

In an attempt to get Khloé to nest, she and Kris go baby shopping, and let me just say: I’ve been in this damn baby store watching these women shop for their tons of newborns more than I’ve ever bought for myself. . . And I will continue to watch it.

Since the baby will be a Leo, Kris naturally decides to throw a lion-themed baby shower, which mostly involves the few women who don’t mind messing up their hair with lion-ear headbands. Among the first to put on the ears? The legend of all legends, Grandma MJ herself. (Imagine how much better MJ: The Musical would be if it were Mary Jo).

The baby shower also marks the first appearance of the season for Kourtney and Travis, the former immediately making up for lost time by saying, “Like, babies in the Bible are always considered a blessing.” Kourt, I don’t think that’s just a Bible thing; I think that’s typically how most people feel.

After a tearful toast from Kim, the group circles the table to suggest T names for the baby, some of which include: Ten, Tiger, Tide, Triton, Tio and Tupac. But we’ll have to wait for an official name because apparently the Kardashians no longer name their children, or at least they don’t say so. U.S what are the names? But if a tree falls in the forest, does it make a noise? Wait… Tree would be a good name, actually.

Next thing we know, Khloé’s surrogate mother is giving birth to Baby Tree, and Kim is on the scene in producer mode filming it all on her cell phone. You, like me, might be taken aback by the puzzling timing of this episode, as we know this baby was born in early August and the scandal broke in December. Apparently, instead of the linear timeline we’re used to with reality TV, this season is throwing all the baby Khloé stuff in this episode to get it out of the way. It’s essentially a stand-alone episode like when Girls would randomly focus on Allison Williams for a week.

And how Girls, this last scene is a pleasure to watch. Khloé’s son is born with a full head of hair, and the two FaceTime the whole family to make introductions. Now, Khloé says, she can put the trauma of the Tristan scandal behind her and begin the healing process, a feeling that helps explain why all of this was left in one episode instead of dragging on for another ten weeks. But, speaking of the devil, Tristán shows up because he decided to invite him to the hospital. “Why not?” she says, and while I know it’s a rhetorical question, this entire episode answers it. However, Khloé is on the right track!

Thankfully, the episode ends with a joyous moment as Khloé takes home her unnamed baby and, God willing, it’s just one of many more joyful moments to come because poor Khloé has been through the doorbell, and I for one am Sick of it.

Keep up with all the drama from your favorite shows!

By submitting your email, you agree to our Terms other Notice of Privacy and to receive our correspondence by email.

The cryptocurrency bear market we may see this year has wiped out more than half of the total market capitalization, so new investors are...
Read more
Load more

Channel partners: are they a bottleneck?

Enterprise technology vendors have traditionally relied on channel partners to sell, acquire, and implement solutions. However, now that we live in a virtualized,...
Read more

The real impact of the ‘Grand Theft Auto’ and ‘Diablo’ leaks

On September 17, a user named teapotuberhacker went to a Grand Theft Auto forum with what they claimed were 90 clips from Rockstar Games'...
Read more

Elon Musk told Twitter on Friday that he is under no obligation to complete his $44 billion purchase of the company, this time citing...
Read more