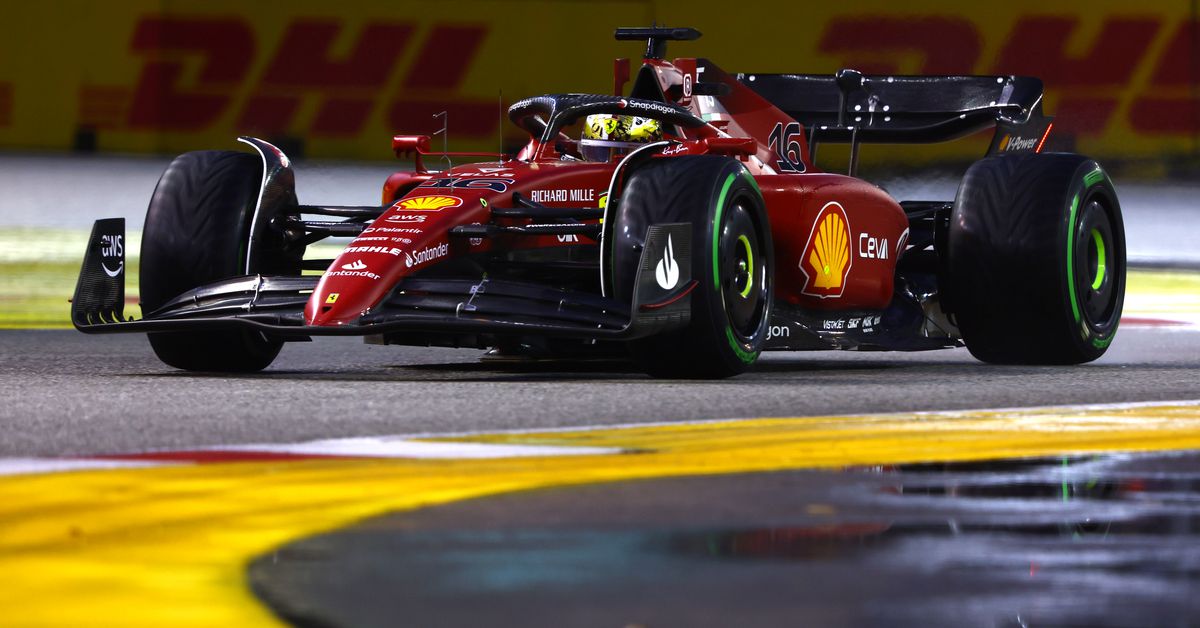 Now he’s going to have to make up a bit of ground during the race for it to remain a possibility.

Verstappen and Hamilton posted the two fastest laps during first qualifying, with Verstappen posting a best lap of 1m53.057s with Hamilton close behind with a lap of 1m53.161s. The five drivers eliminated after the first stage were Alfa Romeo’s Valtteri Bottas, McLaren’s Daniel Ricciardo, Apline’s Esteban Ocon and Williams’ Alexander Albon and Nicholas Latifi.

The second part of qualifying is where Leclerc made his move. After finishing third in the opening segment, the Ferrari driver climbed to the top of the table with a fastest lap of 1m52.343s, followed by Hamilton, Verstappen and Perez. Alpine’s Fernando Alonso completed the top five after the second segment.

As the third part of qualifying began, eight of the final ten cars had moved to slicks, with only Haas’ Kevin Magnussen and AlphaTauri’s Yuki Tsunoda remaining with the intermediate tires. Early in stage three, it looked like Hamilton would secure pole as he posted a lap of 1:51.019 with just over three minutes to go in third qualifying:

But then Leclerc clocked his dizzying sub-1:50 lap, moving into the lead:

When it was over, just 0.054 seconds separated the three men who will lead the field at the Singapore Grand Prix:

As for Verstappen, he will start in eighth position after making the decision to pit during third qualifying, which means he will have some ground to make up during the Singapore Grand Prix if he wants to leave the event with his second. Consecutive F1. World title. After the race, it was confirmed that Verstappen needed to pit due to fuel problems:

Red Bull confirmed that it was a lack of fuel that forced Verstappen to box. If he had completed the lap, going back to the pits could have left the car without enough for a fuel sample. #F1 #GPSingapore

Magnussen and Tsunoda, who stayed with the inters, placed ninth and tenth respectively.

Here are the full results:

The Singapore Grand Prix is ​​scheduled for Sunday, with pre-race coverage starting on ESPN2/ESPN Deportes and Watch ESPN at 6:30 am ET. The race will begin at 7:55 am ET.

NEWYou can now listen to Fox News articles! Aaron Rodgers still owns the Chicago Bears.The Bears made a run on a comeback, but...
Read more

Tems performs ‘No Woman, No Cry’ at the Global Citizen Festival

This November, Tems' version of Bob Marley's "No Woman, No Cry" will appear on Marvel's soundtrack. Black Panther: Wakanda Forever. A portion of...
Read more

Why the US Baby Formula Shortage Was Mishandled

The baby formula shortage is far from over, but to prevent future shortages, the United States...
Read more