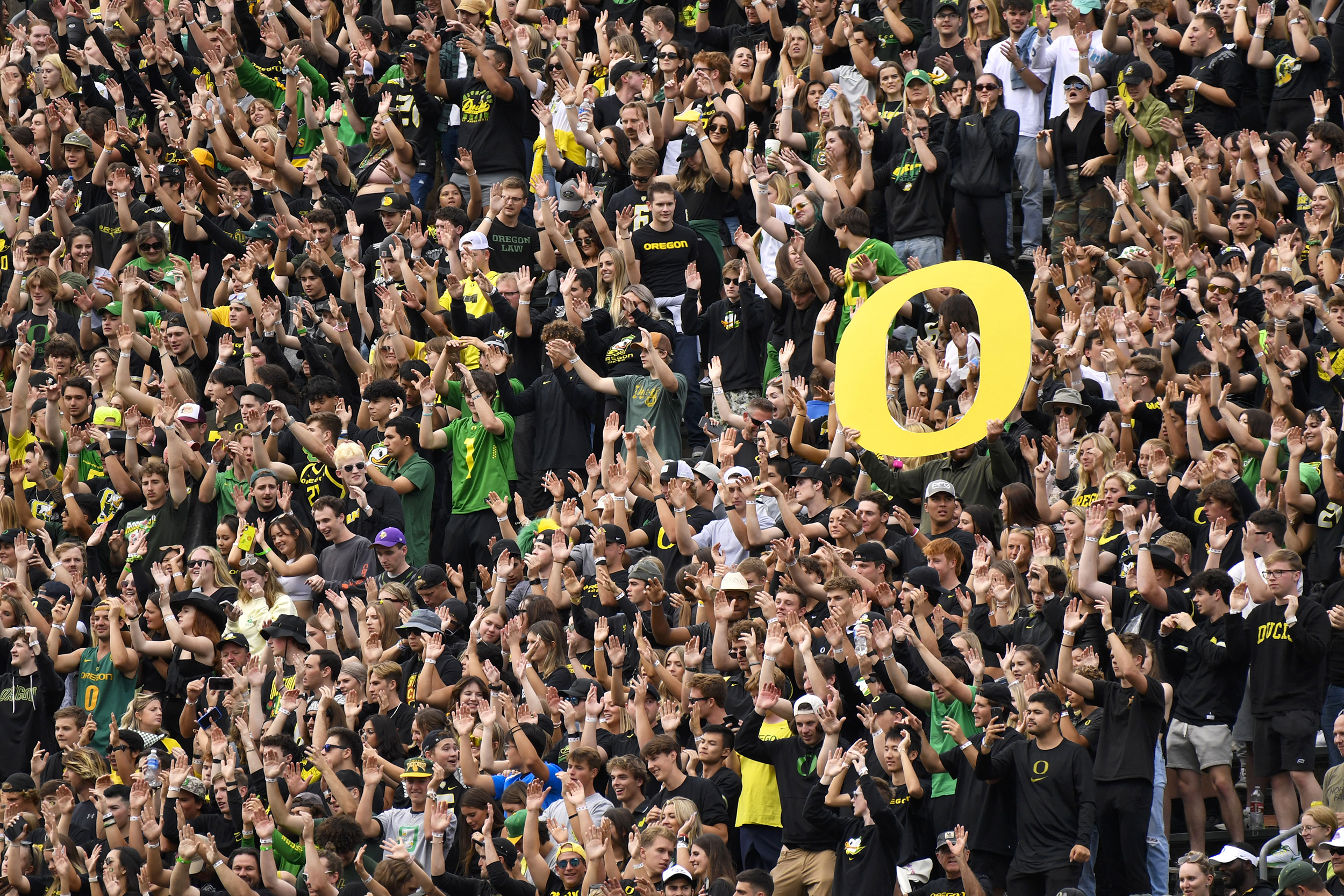 In an age of magnanimous inclusivity, it’s worth pausing to wonder how a crowd of people, even strangers, can feel comfortable singing “F— the Mormons” in unison, over and over, over the course of three hours. . sporting event. The fact that such a circumstance has occurred not once but twice at different Pac-12 college football stadiums in recent years raises another question: Why isn’t more being done to stop it?

On Saturday, a college football fan, who has been identified only as Aubrey, traveled from the east coast to Eugene, Oregon to see his alma mater, Brigham Young University, take on the Oregon Ducks. BYU lost, 41-20, but it wasn’t the score that soured Aubrey’s experience. During the game, he said, the nearby crowd began chanting “Fuck Mormons.” And again.

As a member of the Church of Jesus Christ of Latter-day Saints, BYU’s sponsoring institution, Aubrey wanted the singing to stop. But he also didn’t want to make things worse by facing a noisy crowd. According to account shared with NBC affiliate KSL of Salt Lake City, it was only after the chants started for the third time that he pulled out his phone and started recording, hoping Oregon fans would take notice and stop.

Eventually she spoke with a member of the stadium staff who I was upset over the chant, though it is unclear what, if any, action was taken. Before that, he said, the first-stage worker approached him and shrugged: “Apparently he thought he was funny,” he surmised.

Certainly, there is something to be said for being in a good mood, not taking yourself too seriously, and laughing at trivial offenses: we all know about sticks and stones. Latter-day Saints have a good track record when it comes to turning cheeks.

Both schools are to be applauded for publicly condemning these chants, and I do not doubt the sincerity of the apology. But I also think it’s reasonable to expect schools to do more.

The church, for example, was praised for its serene response to the “Book of Mormon.” The musical from the makers of “South Park,” an animated TV show that had ridiculed religion, captivates Broadway audiences to this day with a mix of accusation and disinformation. (It may be news to the musical’s comically serious lead, “Elder Price,” but god’s plan in fact, it does not imply that you get your “own planet.”)

When the play premiered in 2011, the church decided not to protest but to remove Playbill. ad reading, “You’ve seen the play…now read the book.” the Atlantic’s McKay Coppins last year he described his reaction at the time in a lengthy magazine article about his faith: “I remember being delighted with the Church’s response. Look for smart PR! What a kind gesture! Do you all see? We can accept a joke!”

But then Coppins came across a theater critic who, after seeing the musical, “marvelled at how the show got away with being so ruthless to a minority religion without any significant backlash.” Coppins attributed it to the “kindness” of the Latter-day Saints. But the critic suggested an alternative explanation: “It’s because their people have absolutely no cultural prestige.”

Perhaps the critic is right, and Latter-day Saints really do suffer from the kind of acute cache deficiencies that occur when a culture is born and develops in a high-pass country. Or perhaps a mix of non-coastal friendliness and a distinctive Latter-day Saint ability to smile even when doors are slammed shut on proselytizing missions plays a role.

Regardless, after this most recent round of chanting, it’s time to ask, as Coppins seems to bewhether it be too much good humor in the face of vulgar entertainment and displays of public intolerance and a wave of ecclesiastical vandalism, even the attempted burning of a temple in July – can also inadvertently normalize or even allow that intolerance.

Of course, there is a balance to be struck in the case of the Oregon chants. There are wise reasons for strong First Amendment speech protections, even deeply offensive speech, in public places. And yet, if you can publicly shout “Fuck Mormons” with minimal social consequences, it’s time for Latter-day Saints to collectively push, as Aubrey tried to do, for greater and more immediate action. Especially from school officials when animosity flares on campuses.

ace MSNBC host Lawrence O’Donnell he once joked: “Mormons are the nicest people in the world. … I’ll never get shot.” In fact, when “The Book of Mormon” came out, the show’s creators they said they knew church “was going to be great. … We were not so surprised by the church’s response.”

Maybe that’s why the offending chant wasn’t removed the first time, even though the The University of Southern California apologized. after last year’s episode. Just like Oregon this year. Both schools are to be applauded for publicly condemning these chants, and I do not doubt the sincerity of the apology. But I also think it’s reasonable to expect schools to do more.

Universities should advise fans and students on good sportsmanship. They must set public expectations and take steps to enforce them. They must send staff into the crowd when necessary and, in extreme circumstances, remove offending fans. They must hold fans and students, as well as staff members acting as entertaining spectators, to a reasonable level of responsibility.

It’s the right thing to do, not just for away fans, but for the schools themselves. During last year’s USC-BYU game, USC’s own quarterback was a Latter-day Saint.

It’s the right thing to do, not just for away fans, but for the schools themselves. During the USC-BYU game last year, USC very own quarterback he was a saint of later days. It also turns out that one of the assistant coaches at USC, according to a report in my publication, the desert news.

At Saturday’s Oregon-BYU game, high school quarterback prospect TC Manumaleuna of Salem, Oregon, was on hand as a possible recruit for the Ducks. After hearing the chants directed at his faith, Manumaleuna and his family packed up and left the game early, according to the Statesman’s Journal.

I don’t think people should walk on eggshells for fear of offending where it is not intended. Nor do I believe that a pluralistic society will survive long cycles of entrenched identity grievances. Turning the other cheek remains a sublime Christian admonition and, secularly speaking, just good advice.

But I don’t think it violates that principle to ask universities to live up to what they say they are: diverse and inclusive environments. A Pac-12 commercial last year featured two contemporary abbreviations for these ideals, an LGBTQ pride flag and a Black Lives Matter banner, while a resounding voice bragged about the “progressive spirit that distinguishes our student-athletes, faculty, and fans from everyone else.” ”.

It is a noble and inspiring concept. Without a doubt, it is worthy of consecrating in a television commercial. But after last weekend, I can’t imagine Aubrey or Manumaleuna believing that it’s always lived reality.

Google Pixel Fall Event: How to watch the Pixel 7 and Pixel Watch announcements

The first time we see Norco, Louisiana, in all its pixelated glory, is in an image that frames smokestacks and refinery equipment like a...
Read more
Load more

The end of the Covid-19 pandemic is "in sight", the World Health Organization has declared, after revealing that weekly deaths from the virus worldwide...
Read more

Wireless Samsung Galaxy Buds2 sit deftly in your ears and seamlessly connect to your Bluetooth device, meaning you can cut through the pre-workout fuss...
Read more

Google Pixel Fall Event: How to watch the Pixel 7 and Pixel Watch announcements