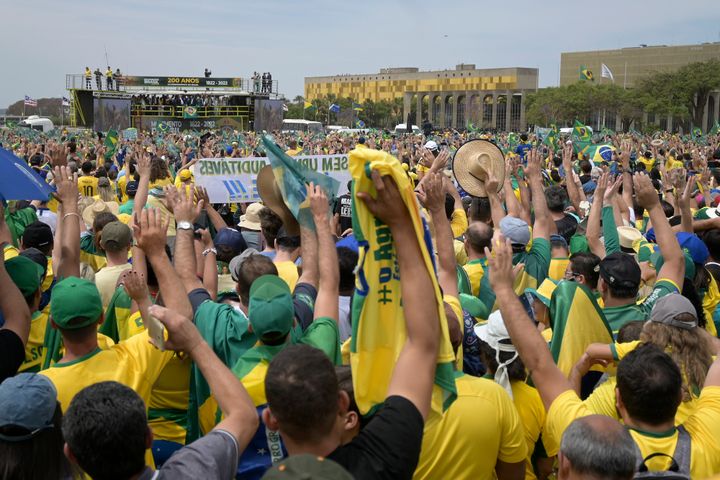 Far-right President Jair Bolsonaro turned a series of Brazilian Independence Day events into campaign rallies on Wednesday, using mass gatherings of his supporters to reiterate his attacks on the country’s democratic institutions ahead of October elections. which he has repeatedly tried to undermine.

Bolsonaro, who has spent two years trying to sabotage an election he is likely to lose by spreading baseless electoral fraud conspiracies, appeared more moderate than usual during speeches in Brasilia and Rio de Janeiro.

Still, he used the Christmas celebration to launch broadsides at his left-wing opponent, former Brazilian President Luiz Inácio Lula da Silva, calling the election a battle of “good versus evil.” He repeated earlier criticisms of the Brazilian Supreme Court, which he accused of participating in its own anti-democratic plot to manipulate elections, using thinly veiled references to court to suggest that he has acted outside the bounds of the country’s constitution. And he nodded to previous democratic crises in Brazil’s history, suggesting that a new one could soon unfold.

“History can repeat itself,” Bolsonaro said during a breakfast in Brasilia, the country’s capital, while referring to the 1964 military coup that overthrew a democratically elected government and established a brutal 21-year dictatorship.

His supporters understood the message: they booed at his only direct mention to the Supreme Court, the newspaper O Globo reported. Many carried signs calling for military intervention or advocating the removal of judges who have challenged and investigated Bolsonaro’s empty claims of electoral fraud, according to other reports.

The Sept. 7 rallies came amid a tense campaign season marked by flare-ups of violence and fears that Bolsonaro plans to challenge the results if he loses. And while the crowds that gathered in Brasilia, São Paulo and Rio de Janeiro remained peaceful, the day’s events will do little to calm fears about a turbulent month ahead for the world’s fourth-largest democracy.

“It was what he wanted: after months showing contempt for democracy, questioning the polls and fueling his coup plotters, Bolsonaro managed to turn the bicentennial into a rally,” said Guilherme Casarões, a political scientist at the Getúlio Vargas Foundation in São Paulo, said on Twitter after the events are over.

Bolsonaro’s affinity for Brazil’s first dictatorship and his efforts to link the Brazilian military to his cause have raised fears that he may attempt a coup. His admiration for former US President Donald Trump has inspired the feeling that an event that mimics the insurrection of January 6, 2021 in Washington is now inevitable in Brazil.

His efforts have drawn support from the global far right: former Trump spokesman Jason Miller, who was briefly detained in Brazil last year and has sought to deepen ties between Trump’s MAGA movement and Bolsonaro, who was at the Rio rally touting his right-wing social media site.

A dramatic democratic breakdown was always unlikely to happen on Wednesday, Brazilian political experts said. The rallies on September 7 were primarily intended to energize Bolsonaro’s supporters and show that the president can still call the masses to the streets when he challenges the results of next month’s elections. He wanted events big enough to argue that the polls were wrong and that he couldn’t lose a fair election, just like Trump tried in 2020.

It was a gamble: An outbreak of the kind that marred last year’s Independence Day demonstrations, when Bolsonaro supporters tried to get past the barricades protecting the Supreme Court, could have further crushed Bolsonaro in the polls, the analyst said. Brazilian politician Thomas Traumann told HuffPost last week.

But it seems to have been worth it, at least symbolically. While the crowds in São Paulo were mostly modest, mobs of Bolsonaro supporters swarmed Brasilia and Rio, blanketing the nation’s capital and iconic Copacabana beach in the green and yellow colors of the Brazilian flag.

“Their intention was to show their power of mobilization, to get great images for television advertising, to show everyone the support of the Army and to get free media,” Traumann said Wednesday night. “And he did.”

By staging the protests alongside traditional military celebrations, Bolsonaro also hoped to deepen the perception that the armed forces would intervene on his behalf after the election. Bolsonaro and his allies have studied the events of January 6 closely and have apparently determined that a Lack of support from the military. and the Pentagon condemned Trump’s attempts to nullify the election and remain in power.

Bolsonaro has appointed numerous generals and hundreds of soldiers to key positions within his government throughout his presidency. Current and former military leaders have, at times, echoed his claims about Brazil’s electoral system, which has never faced credible accusations of fraud and is widely regarded as one of the safest and most efficient in the world.

In recent days, however, some military leaders have tried to distance themselves from Bolsonaro’s authoritarian musings, warning that the armed forces will not become politicized before the elections. An actual coup attempt, while not out of the question, remains unlikely, most experts say.

But the military, who staged exercises and had a large presence at what was essentially a campaign event in Rio de Janeiro, will struggle to distance themselves from the perception that they are in the pocket of a president who wants to use the armed forces to create uncertainty. around the elections.

“Their intention was to show their power of mobilization, to get great images for TV advertising, to show everyone the support of the Army, and to get free media. And he did.”

Wednesday’s demonstrations are unlikely to alter Brazil’s political landscape or Bolsonaro’s increasingly dire electoral outlook. He has followed da Silva in almost every poll conducted over the past year. And while he has made small gains amid an improving economy, Bolsonaro is still expected to fall behind his leftist archenemy. for 13 points in the first round of elections, according to a survey published last week. Brazilian elections require a two-person runoff if no candidate achieves a simple majority, but Bolsonaro is also trailing da Silva in a head-to-head matchup.

Da Silva did not make an official act on Wednesday. Instead, he used a Tuesday rally to criticize Bolsonaro for appropriating a national holiday and Brazil’s patriotic symbols to attack democracy. On Wednesday, since Silva’s campaign said he would file a complaint with Brazil’s electoral authorities alleging that Bolsonaro had improperly campaigned during a public rally.

“This government has abandoned the people and has been destroying the country,” da Silva said on Tuesday. “They use our flag to lie, preach hate and promote the sale of weapons. They threaten our sovereignty. And sovereignty is the defense of the territory and our wealth. It is respect for democracy.”

Bolsonaro remains underwater with Brazilian voters and has the highest rejection rate among all candidates. But he has shown no willingness to moderate or abandon the politics that carried him to victory in 2018, even as most Brazilians have bristled at him.

On Tuesday morning, the president, who infuses a particular version of machismo in everything he does, so he suddenly started leading the crowd in chants of “imbrochavel,” announcing that he never loses an erection.

Bolsonaro’s path to legitimate victory is narrowing and may already be closed. But just pay attention to the base of him, and the size of Wednesday’s demonstrations will probably only embolden him in the next month.

“Today he showed that, despite being stagnant in the polls, he is still capable of mobilizing a large number of enthusiastic supporters,” said Maurício Santoro, a political scientist at the State University of Rio de Janeiro. “They will be the basis for his refusal to accept the result of next month’s elections.”

Welcome to Crypto Diaries, a new series on BuzzFeed News that helps us understand what the future of Web3 could...
Read more